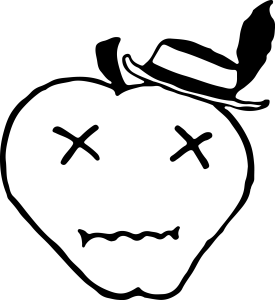 The Hot Hillbilly Band from the Heartland 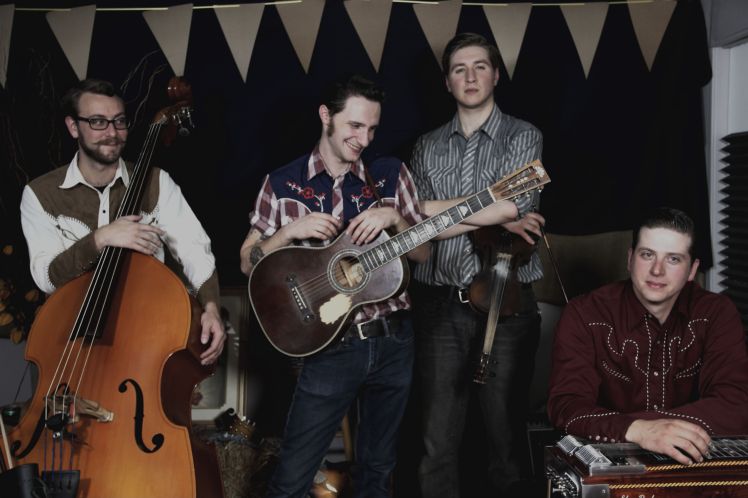 “THE HOT HILLBILLY BAND FROM THE HEARTLAND!”
Like a tasty sandwich of oldtime music, Johnny & the Apple Stompers put meaty honky tonk and country between bluegrass songs with old time blues and jazz thrown in for flavor! Led by North East Ohio locals, Johnny Miller and Cory Grinder, this band is a dedication to classic country like Hank Williams, Roger Miller, and Willie Nelson through original material written by Johnny. Formed in 2010 as a skiffle band playing on the streets in Akron, Kent, and Cuyahoga Falls, the Apple Stompers have evolved their sound though years of playing at bars, weddings, retirement homes, and flea markets. Johnny’s bright acoustic picking and lonesome voice is paired with Cory’s high harmonies and fiddle playing along with the addition of members from brother-bands, “Rodney and the Regulars”(Rodney Dewalt, Stephen Karney, and Richard DeWalt) and “Fast Molasses”(Jason Willis, Shawn Wee, and Steve Gill). Pedal Steel, Upright Bass, Banjos, and more are often in the mix. Their debut album, “Down The Line,” was released in December of 2012, their second full album “Prison Bound” was released in the summer of 2013 and their brand new EP, “Far from the Tree” was released Novemeber 2015. Stay tuned for their next release coming Spring 2016! Stomp on!

Interested in interviewing Johnny & the Apple Stompers or getting the inside scoop on      upcoming shows and new music?
Contact Publicist Brittany Nader at brittany.nader1@gmail.com.

What Folks are Saying About the Apple Stompers:

“While they covered everyone from Merle Haggard to Gus Cannon’s Jug Stompers, it was their originals, based firmly in Americana traditions, about drinking whiskey and pretty girls not giving them the time of day that were the most compelling.”
— Now This Sound Is Brave

“Bluegrass-based but with plenty of country, ragtime, jazz and blues with a gritty old time tinge.”
— The Devil Strip

“Johnny and The Apple Stompers are an Americana and bluegrass band with jazz, folk and country influences. […] One of the unique aspects of this band is their versatility in playing other instruments and their ever-changing lineup.”
— Akronist

“Formerly known by the moniker Grandpa Johnny, Miller has been spreading his brand of hillbilly music around Northeast Ohio for years, and he’s a common sight around Kent. Yet it’s his voice, which sounds something like a young Jimmie Rodgers, which seems to be rare for most 25-year-old country singers.”
— KentWired

“…One of a new wave of younger bands dedicated to bluegrass and other old-timey forms of music including traditional blues and country and ragtime.”
— Cool Cleveland